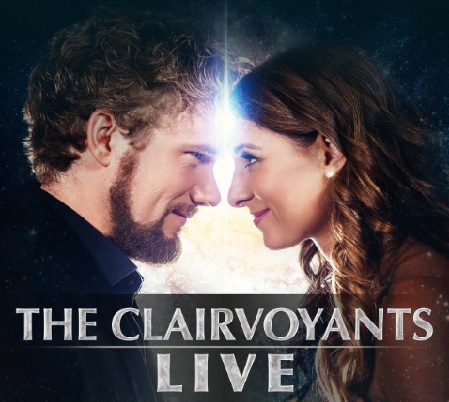 The performance of The Clairvoyants on November 19th, 2021 at The Vine Showroom is now rescheduled to October 22nd, 2021.

Customers who have purchased tickets through dellagoresort.com or the Vine Box Office for the show and are unable to attend the newly scheduled showtime, may receive a refund or credit through the del Lago Box Office before September 18th, 2021 by emailing vineboxoffice@dellagoresort.com

For further information or questions please contact the Box Office at 315-946-1777.

When they met in October 2011, they began to develop their "second sight" act, and two months later brought it on stage for the first time. Within a year they had developed a full length show. Shortly thereafter, they started touring Europe.

In 2014, they received their first long term contract in America. After a six month run in the show "The Illusionarium," they were offered a featured spot in the largest touring magic show in the world, “The Illusionists,”.

In 2016, they decided to take part in the biggest talent show in the world, “America’s Got Talent.” After four months, six different performances and over 100.000 contestants, America voted them second place. In October 2016 they appeared, together with winner Grace Vanderwaal, at Planet Hollywood in Las Vegas. More recently, in early 2019 they were personally invited to compete in the AGT spinoff, America’s Got Talent: The Champions, wowing the judges with every performance. Being part of not one, but two highly successful TV shows has proved  part of this show was another major step in the evolution of their career.

A highlight of their career was the opportunity to perform their show at the Sydney Opera House. In winter 2016 they experienced another career highlight, headlining the show “The Illusionists - Turn of the Century” in the Palace Theatre in New York City, on Broadway. The show was the best selling magic show in Broadway history.

In April 2017 the Academy of Magical Arts and The Magic Castle Hollywood awarded Thommy Ten & Amélie van Tass "Stage Magicians of the Year 2016" for their extraordinary art.

Thommy Ten and Amélie van Tass continue to appear with their full length show in America and Europe and perform for corporate events worldwide. In beginning of 2019 they appeared twice on NBC's new show "America's Got Talent The Champions".