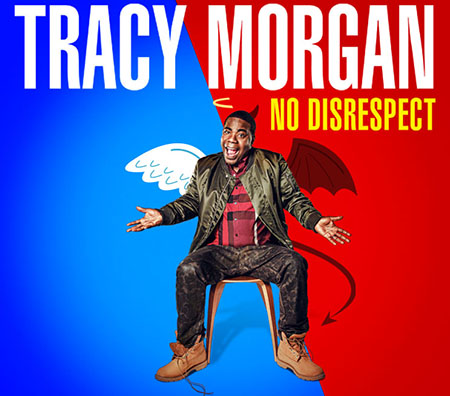 The performance of Tracy Morgan No Disrespect at The Vine Showroom is now rescheduled for Saturday, April 2, 2022 at 8PM.

Guests that purchased tickets for this show will be able to use their current ticket for rescheduled for Saturday, April 2nd, 2022 at 8PM. Tickets do not need to be reprinted or exchanged.

Customers who have purchased tickets through dellagoresort.com or the Vine Box Office for the show and are unable to attend the newly scheduled showtime, may receive a refund or credit through the del Lago Box Office through June 25th, 2021 by emailing vineboxoffice@dellagoresort.com. Cash sales for this performance can be refunded through June 25th, 2021 at the Cashier on the casino floor.

For further information or questions please contact the Box Office at VineBoxOffice@dellagoresort.com.
________________


Tracy Morgan is one of the most respected comedians in his field. Starring for seven seasons on NBC’s Emmy and Golden Globe Award-winning 30 Rock, Morgan appeared opposite Tina Fey and Alec Baldwin as “Tracy Jordan,” the unpredictable star of Lemon’s (Fey) hit variety show, TGS with Tracy Jordan. He can currently be seen in the second season of the TBS show “The Last OG” which he stars in and executive produces. Most recently, he starred in in Paramount’s What Men Want with Taraji P. Henson which released in January 2019. Morgan’s stand up special Staying Alive was released globally on Netflix in May 2017. Additionally, Morgan received a star on the Hollywood Walk of Fame in the 2016 class.

From his work on 30 Rock, Morgan has received an Emmy Nomination in the Supporting Actor category and been nominated multiple years for the Supporting Actor NAACP Image Award. The 30 Rock cast has also won the Screen Actors Guild Award for “Outstanding Performance by an Ensemble in a Comedy Series.” The beloved series came to an end in January 2013. Outside of the show, Morgan also received an Emmy nomination for Outstanding Guest Actor in a comedy series in 2016 for hosting an episode of SNL.

In April 2014, Morgan released a standup special for Comedy Central, titled Tracy Morgan: Bona Fide, which brought Comedy Central one of its largest viewership for a standup special that year. Previously, his first stand up special was titled Black & Blue and released on HBO in 2010. Another milestone for Morgan was reached in 2009 with the release of his first book, a compilation of studied anecdotes and some of the more serious moments that shaped him and his career entitled I Am The New Black.

Morgan has also had the opportunity to be a part of some of the most successful animated films in recent years. In 2009, he made his animation debut lending his voice for Jerry Bruckheimer’s G-Force, a combination live-action/CG film. The film opened number one in US box offices and was celebrated by audiences worldwide. In 2013, he starred as the bulldog, Luiz, in the film Rio and again in April 2014 when he reprised his role in Rio 2. Morgan’s voice can also be heard in the Oscar-nominated film, Boxtrolls, as one of the film’s antagonist, Mr. Gristle.

Morgan has headlined across the country and abroad on various tours and festivals for his stand-up comedy. He was first introduced to television audiences in his role as Hustleman on the hit comedy series Martin. He went on to join Saturday Night Live in 1996 where he appeared for seven seasons and created such memorable characters as “Astronaut Jones” and “Brian Fellows.” After leaving SNL, Morgan went on to star in his own comedy series The Tracy Morgan Show and voiced “Spoonie Luv” on Comedy Central’s Crank Yankers. Additional film credits include: Cop Out, the remake of the British film Death at a Funeral, First Sunday opposite Ice Cube and Katt Williams, The Longest Yard opposite Adam Sandler, Jay and Silent Bob Strike Back, Head of State, Son of No One, Why Stop Now and Fist Fight.

Morgan currently resides in New Jersey with his wife their daughter.