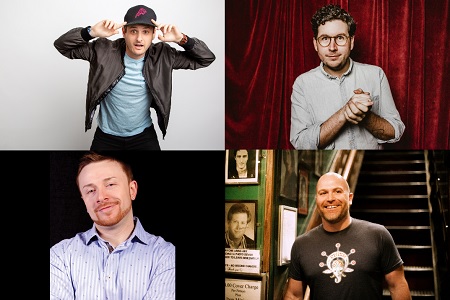 Jiggy is a stand up comedian, podcaster and musician. Born and raised outside of Boston, Massachusetts he took the stage for the first time at the age of 15 for a popular improv troupe. Stand up comedy soon followed during his college years and has blossomed into a career that has taken him across the country. JIggy has been noted as one of the countries top upcoming comedians by Comedy Central and has won numerous comedy competitions up and down the east coast. In 2013 Jiggy joined The Impractical Jokers Tour presented by TruTV as opening act, performing to sold out theaters coast to coast.

Jiggy released his first full length comedy album, Jokes N Jams, in the summer of 2014 to rave reviews. The album features his brand of stand up, sketch and musical comedy. The first music single and video, Lob Wedge, was highlighted by The Golf Channel/NBC and websites across the world. Jiggy made his national television debut on the sketch program, Jokers Wild, on TruTV in September of 2014 and introduced the Jiggy & Jon Podcast with Jon Kilmer. The Jiggy & Jon Podcast has attracted thousands of listeners with releases weekly on iTunes. Jiggy currently resides in New York City.


JF Harris
J.F. Harris is a former NYC now LA based stand up comic and writer. You may have seen his stand up on The Late Late Show with James Corden and you can catch him on the new Bill Burr presents The Ringers on Comedy Central. J.F. has written for big stars like Will Smith and shows like Netflix's Magic For Humans. He tours regularly in theaters and arenas with his good friends Joel McHale, Whitney Cummings and The Impractical Jokers. J.F. headlines clubs around the world from Hong Kong to Australia, The US and Canada. He's been a part of the NY Comedy Fest, The Kennedy Centers District Of Laughs, Just For Laughs Road Shows, Wild West Comedy Festival, Guild's Laugh Fest and many more.  If you are in Los Angeles you can catch J.F. Hosting WORKSHOP a new material show at The world Famous Comedy Store the last Tuesday of every month. J.F. can also regularly be seen at The Comedy & Magic Club and The Hollywood Improv.


Chris Johnston
Chris Johnston electrifies the stage with a fun, creative and charismatic delivery of personal stories, thoughts and observations that all audiences can relate to and enjoy.  With a boyish charm, quick witted versatility and relaxed ability to interact with audiences, a Chris JohnsTon show is always sure to be fun, full of energy and one not to be missed.

Chris Johnston has been featured on popular radio shows, podcasts, comedy festivals and has gone on to tour with national acts at clubs, colleges, casinos, amphitheaters and even arenas across the United States. He's performed at the MGM Grand in Las Vegas, Borgata & Hard Rock Casinos in Atlantic City, The Greek Theater in Los Angeles and the Prudential Center in NJ just to name a few. Chris has toured with the “Howard Stern-Killers of Comedy” and “Best Damn Comedy Show!” tours, featuring popular comedians from the Howard Stern, Opie & Anthony and other Sirius/XM radio shows. He has also toured with a variety of popular comedians over the years and currently tours the country as an opening act for the Impractical Jokers.


Mike Fiona
I am a standup comedian based out of NYC. I am also the host of "Amigos", a music & comedy podcast on the Osiris Network. Also, I am a writer & producer for The Impractical Jokers on TruTV.