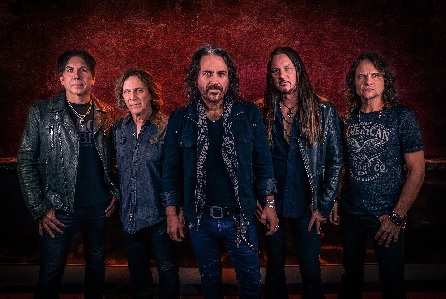 The performance of Winger on Friday, June 11th, 2021 at The Vine Showroom is now rescheduled for Saturday, December 4th, 2021.

Customers who have purchased tickets through dellagoresort.com or the Vine Box Office for the show and are unable to attend the newly scheduled showtime, may receive a refund or credit through the del Lago Box Office before May 19, 2021 by emailing the Box Office at Vineboxoffice@dellagoresort.com

For further information or questions please contact the Box Office at VineBoxOffice@dellagoresort.com.
_______________

One of the most misunderstood Hard Rock bands to emerge from the late 1980’s are back with their Billboard Top 100 album "Better Days Comin'".

From the opening riff of album opener “Midnight Driver Of A Love Machine” to the final outro lick of “Out Of This World”, it is clear Winger is back and better than ever. Hard rocking songs like “Queen Babylon”, adrenaline fueled rocker “Rat Race”, the inspired progressive rock of “Tin Soldier”, and touching ballad “Ever Wonder” display the band’s diversity whilst always centering on great songs.

"A hard-hitting album...Winger's blood is still pumping...so are the tunes" - Kerrang Magazine!

Formed in 1987, Winger soared to immediate success with their 1988 self-titled release. The album spawned the hit singles “Seventeen” and “Headed For A Heartbreak” and achieved platinum sales status. Winger also stayed on the Billboard Top 200 chart for over 60 weeks where it peaked at #21. Their next album, “In The Heart Of The Young”, also achieved platinum status and contained the singles “Can’t Get Enuff” and “Miles Away”. The change in musical climate of the mid-90’s, compounded with unprovoked ridicule on MTV’s popular Beavis and Butthead, led the band to go on hiatus in 1994 following the release of their critically acclaimed third album “Pull”. In 2001, the band reunited and have not looked back since.

Winger continues to make a name for themselves with relentless touring, and recent studio albums “IV”, “Karma” and “Better Days Comin’” shows the band on top of their game, winning back fans and critics alike because of their exceptional musicianship, Kip Winger’s powerful vocals, and the band’s incredible songwriting. Winger’s resurgence in popularity has seen the hard rock four-piece break back into Billboard’s Top 100 and in 2016 Grammy nominee Kip Winger hit #1 on Billboard and iTunes charts with his debut classical music album “Conversations with Nijinsky”.

"This is a band who refuse to merely glide on past glories...Winger push their own boundaries" - Classic Rock Magazine