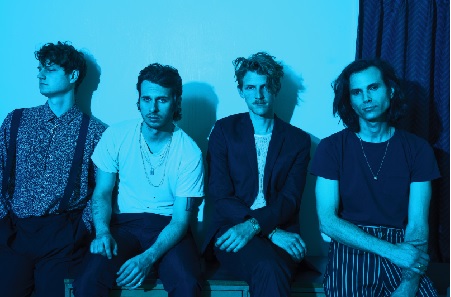 
Founded in in 2009, Foster the People achieved success with the 2011 release of their debut album Torches, which has sold nearly two million albums and over nine million singles worldwide. Torches features the #1 hit single “Pumped Up Kicks,” which was recently named one of USA Today’s “100 Absolute Best Songs in History,” and also spawned the chart topping singles “Don’t Stop (Color On The Walls),” “Houdini,” and “Helena Beat.” Foster the People garnered three Grammy nominations for their monumental debut, including Best Alternative Album, Best Pop Duo/Group Performance for “Pumped Up Kicks” and Best Short Form Music Video for “Houdini.”Supermodel was the second full-length record from Foster the People. Influenced by front-man Mark Foster’s world travels and shifting perspective, the album was recorded in studios around the world and features fan favorites including "Coming of Age" and "Best Friend." In 2017, the band followed with their third record, Sacred Hearts Club, which features multi-format, Double-Platinum-certified hit “Sit Next To Me.” The track, described as “pure shimmering pop” by The Associated Press and named one of Billboard’s “Best Songs of 2018,” has accumulated nearly 300 Million global streams to date. At radio, the song hit #3 at Alternative, #19 at Top 40 and reached Top 10 at both AAA and Adult Pop. The track also garnered a 2019 Billboard Music Award nomination for Top Rock Song and a nomination for Choice Rock/Alternative Song at the 2018 Teen Choice Awards. Most recently, Foster the People have released new singles “Pick U Up,” “Imagination,” “Worst Nites” and “Style, with front-man Mark Foster directing the music video for each track. The band is currently at work on more new music to be released throughout 2020 and beyond.