Tommy James and The Shondells 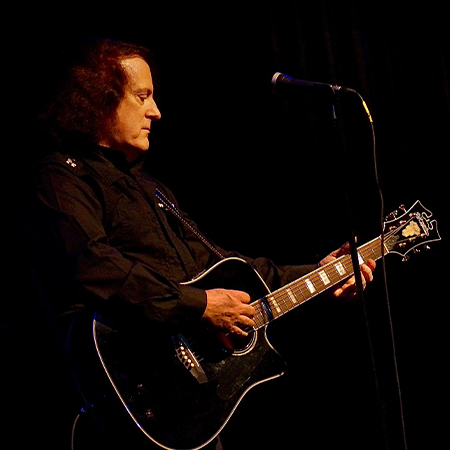 
CRYSTAL BLUE PERSUASION, CRIMSON & CLOVER, MONY MONY, I THINK WE'RE
ALONE NOW, DRAGGIN' THE LINE, HANKY PANKY, SWEET CHERRY WINE, THREE
TIMES IN LOVE and MIRAGE are just a few of the many hits - 23 GOLD RECORDS, 9
PLATINUM ALBUMS and over 100 MILLION RECORDS SOLD WORLD WIDE...and 32
BILLBOARD HOT 100 CHART HITS!
Many artists around the world have covered and continue to cover his songs
including PRINCE, BRUCE SPRINGSTEEN, JOAN JETT, BILLY IDOL, KELLY
CLARKSON, REM, DOLLY PARTON, CARLOS SANTANA, CHER, TOM JONES and
even THE BOSTON POPS.
TOMMY'S music can be heard in 55 films and 39 tv shows and numerous
commercials to date.....most recent, a new film FINDING STEVE MC QUEEN with
Forest Whittaker will feature 4 songs ( we believe this to be a first for a singer,
songwriter.)
BMI lauded TOMMY for his success with the presentation of FIVE MILLION AIR
AWARDS for his music being played more than 21 million times on air.
TOMMY'S critically acclaimed autobiography ME, THE MOB AND THE MUSIC is on
ROLLING STONE'S TOP 25 BEST MUSIC MEMOIRS LIST and is now in production
for a major motion picture with producer BARBARA DEFINA whose credits include
GOODFELLAS, CASINO, CAPE FEAR, COLOR OF MONEY, AGE OF INNOCENCE and
SILENCE...the screenplay written by MATTHEW STONE whose credits include
INTOLERABLE CRUELTY, MAN OF THE HOUSE and BIG TROUBLE.
TOMMY now has his own show on sirius/xm radio - GETTIN' TOGETHER WITH
TOMMY JAMES every sunday evening 5-8pm - 60s on 6 channel.
THE PRESTIGIOUS NEW JERSEY HALL OF FAME inducted TOMMY and his life-size
hologram can be viewed at the NJHOF EXHIBIT at NEWARK AIRPORT in New
Jersey, terminal C. He was also given THE PITTSBURGH LEGEND AWARD and was
voted THE JUKEBOX ARTIST OF THE YEAR AWARD by THE AMUSEMENT AND
MUSIC OWNERS ASSOCIATON OF NEW YORK.
Now entering his 51st year in the music business he just finished a new album
ALIVE! which will be released in april, 2019..... AND he continues to tour around
the country!
FOR ADDITIONAL INFORMATION AND/OR INTERVIEW REQUESTS CONTACT CAROL
ROSS -crd9138@aol.com
FOLLOW TOMMY ON FACEBOOK, TWITTER AND INSTAGRAM - WEBSITE IS
TOMMYJAMES.COM