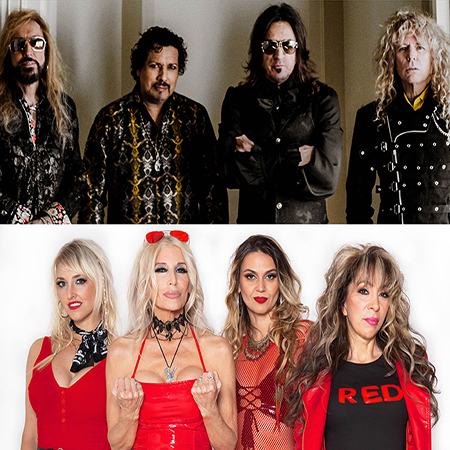 When it comes to groundbreaking bands in the Christian hard-rock genre, Stryper is renowned for its distinctive brand of “heavenly metal,” extraordinary crossover success and venerable endurance. The Grammy-Nominated and Dove Award Winning group ascended to prominence in the 1980s with Billboard Top 40 hits like “Calling on You,” “Honestly” and “Always There for You.”

Stryper’s career album sales exceed 10 million worldwide, including 1986’s multi-platinum release To Hell with the Devil. The band also made history in 1987 when it notched three songs in Dial-MTV’s Top 10 with videos “Calling On You”, “Free”, and “Honestly”, being the first band ever to have two sings in the Top 10 simultaneously.

THERE’S ONLY ONE ALL-FEMALE HARD ROCK BAND FROM THE 80’S WHO:

Sold over a million albums
Had six #1 videos on MTV
Had four songs in Billboard’s Top 100.
Vixen was founded in St. Paul, MN by high-schooler guitarist Jan Kuehnemund. The desire to achieve the rock star dreams like so many before her, Jan took her group to Hollywood but soon retooled the line-up, which included; vocalist Janet Gardner, drummer Roxy Petrucci and bassist Share Ross (Pedersen).